Last weekend I went to a three daysculpting  workshop titled "two in one". The idea was to mix two different stones into one image. Since I don't do things in halves I wanted to fit one image into another one. I had tried it at home last summer and ended up throwing the result away. i couldn't get it to look like the way I wanted to. I think I used stones that were a bit small and a bit hard.
However this weekend I would make it work !

this was the design :

The big cat had be in a dark stone (brown or black preferably), the little one needed to be white.

V. had a very nice selection of dark grey stones whit white clouds. A lot of my fellow sculpurs chose one of these. Alas before we were working an hour  four of them had broken (mine was one of them) : it was a very layered stone which split and broke whenever the pressure became a bit much :-(  a reason to be very careful ! On the other hand he was so very soft that no actual hacking had to be done.

So after rasping and filing a half day cat n°1 was ready :

A sturdy grey cat with a cut-out of a little cat in its belly.  Now it was time to make the little cat; big enough, but only slightly bigger than the cut-out. I wanted it to be in albast because that is a rather soft stone that is very though - it's not prone to cleaving or beaking. We also had to apply some raisin to the big cat because a crack had started showing. When rasping the head I could feel vibrations in the area of the ear, and we heard it too : a kind hollow-ish sound.  We had to warm up the stone a bit - the the crack start to open, and when you apply raisin to it, it seeps inside. Unfortunately it has to be quite dry before you can go on working on the stone.

Saturday I finished the white one, and spent the rest of the day getting it to fit into the big black one.

as you see here there are two white cats. That's because the albast was rather thick and I made a thick whtie cat - which is a little more safe  tahn making a very thin cat. And then afterward sawed it neatly in two.

it almost fitted - almost ! So I had to make the gray mould slightly bigger by raspin tiny bits here and there and fitting very often to see where thing didin't fit smoothly

here the white one is glued fixed in the black one with raisin again. It sticks out about one millmeter. It has to be rasped to one level once everything is dry.

And this is the finished product, after the last bit of rasping, sanding and polishing (I did the last bits at home) and after being properly waxed : 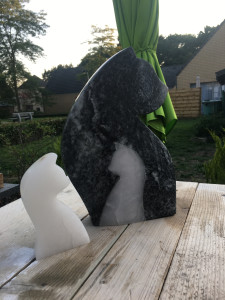 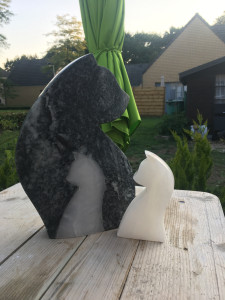 There's now a white cat that's part of the grey/black one and one white one that's standing seperately. I'm quite happy with the result.
Collapse