After the storm had passed we went out for a walk and found several leaves and branches littering the ground. This morning I read in the paper that all over the country several trees were uprooted and a number of houses had been set on fire by lightning. Some highways were blocked and train traffic was disturbed by fallen trees.

Today started a bit chilly and clouded, but by now we have nice sunny weather and it is warming up again. The weather forcast predicts another heavy storm by tomorrow evening.

The  many liters of water have been good for my small veggie garden (and for my water barrel). All the plants survived the heavy winds backed up as they were by the garden shed :-) 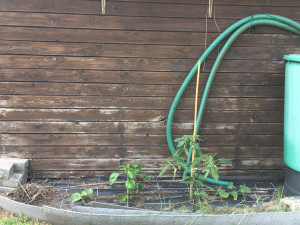 from left to right : the melon plant, a paprika, an italian tomato and a zucchini plant 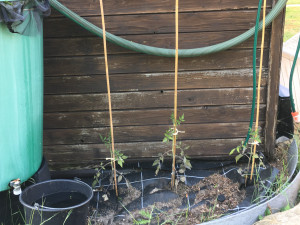 the three tomato plants from my son 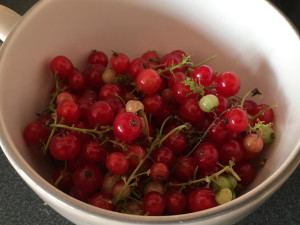 the red currant bushes and their first harvest. The first (and largest) bush had a great number of berries that were ripe already. The wind had dislodged quite some of them; a fest for the couple of pigeons that were brave enough to defy my sleeping dog :-)
I think I'll make a cheescake with red berries tomorrow ....

And before anyone asks : the big green tube belonged to my predecessor and I have no idea what its use is, or what I can do with it .... So if anyone has any ideas ???

A nice day today - and yet another storm this evening. Not so loud as the one we had yesterday, but a lot more rain. And a longer duration. The one yesterday blew itself out after an hour, but htis one is going on for about two hours now.
As fascinating as the sound and light show is, a daily performance is a bit too much for my liking.
Do you think it would help if I cancelled my subscription ?
Collapse