Last sunday was my birthday - another year older. I did celebrate on Sunday, but actually I have been celebrating since Thursday. My two nieces dropped by to bring me flowers (tulips) and take me out for dinner. We had planned to have a nice walk with Max, but the rain sabotaged our plans. So instead of walking we did some patchwork before we headed to the restaurant. I had chosen an Italian restaurant and while we were enjoying our pasta the sky outside turned all black and a hailstorm broke loose. In a matter of minutes the town square was covered in hail balls, pretty big ones too. They were still on the ground after more than half an hour when we left the restaurant. 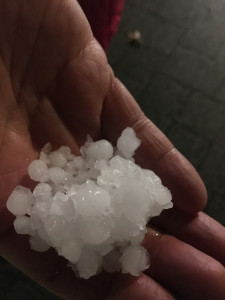 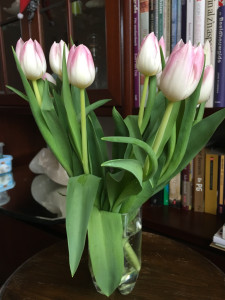 the hail and the tulips.

Friday the weather wasn't much good either, so it was a good day to do some cleaning and some needlework.  I'm with an amateur theater company as prop master-whisperer and I take care of the make-up for the men. This year's production was a comedy featuring a transvestite, an arab person, a construction worker and some other clichéd persons. It was not very high quality, but the last few years they had performed rather serious plays and the audience had been asking for a farce.  Saturday was the last performance and afterwards we celebrated my birthday. I got home rather "early" in the morning :-)

On Sunday I celebrated my birthday for the third time, this time with the kids and the grandkids. In the afternoon we played some board games, and then we had dinner. My oldest son likes to cook and he had prepared a nice tenderloin with grean beans and croquettes. It was very tasty. For desert he had made profiteroles with a chocolate sauce. The profiteroles were great but something had gone wrong with the sauce. The chocolate layer was rather thick and had glued all the pastry in one solid tower. It was very tasty, but we had to tackle the pastry with some forethought.
( Collapse )

And today the sun was back. After having been away from home rather a lot the last few days I spent today with Max. We went for a few nice long walks in the sun. At the moment he's napping and snoring happily on his cushion :-)
Collapse