edgeofthewoods,
I wish you a very happy birthday
and may this year bring you all
the happiness you deserve !

Last Friday I got my second shot with the Pfizer vaccine. So now I'm officially fully vaccinated ! My arm is still a bit painful, and I've been a bit under the weather the first day after the shot but that's the worst of it.

Other than that I've been re-decorating the living room. The room was dominated by a very large, rather dark, bookcase filled to overflowing with the many books I collected over the years. The bookcase was bougth many years ago when I lived in a house that was markedly bigger than the one I live in now, and after a lot of thinking (and agonising)  I finally decided to give away most of the books and get rid of the bookcase. It took me a few days to distribute the books to friends and the rest was donated to the thrift shop. I still have a lot of books now, but i think I gave away 2/3 of them.
Next Tuesday I can pick up the new - smaller and lighter - bookcase with the company that makes such good meatballs. and the comes the job of assemblin it and  fill it again with the books I've kept : the ones about my crafts and some I reall, really can't live without :-D
I'll post some pics when all is ready.

I woke up this morning and the whole world was white. It didn't snow this much a few months ago when it was winter ! 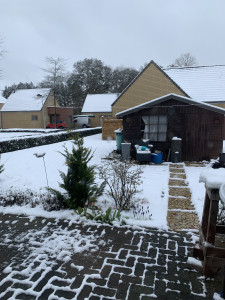 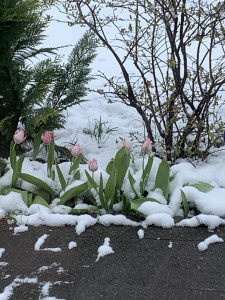 My poor tulips have closed their petals and are shivering on their little stems.  I hope they'll survive this :-)

The strangest things have been going on with the weater lately. In the course of of a month the temperature here has v-been going up to 24°C and back down to 10°C, then back up to 23°C and now we're somewhere in the neigborhood of 1°C and even below zero at night.
Last week I went to help a friend with cutting back shrubs and plants that were trying to take over the garden. It was hot - we were sweating and had diner outside on the terrace. This week we're inside, huddled in sweaters, and having the heating on. I hope somewhere along this month the weater will decide what it's going to do :-)

I wish you a very happy year
with lots of little and some great joys,
and may your days be filled with colour !! The weather is overcast and the temperature is a balmy 10°C. But tomorrow my friends it's going to rise to 18°C ! Spring is definitely on its way :-D

Time to get the gardening gloves out of the shed.

Look what I found in my garden yesterday : Since you got me drooling over your sheperd's pie yesterday I'm presenting you my version of it today. I love this dish and we make in all sorts of variations.
Today I mixed the meat with zucchini, shallots, oxheart cabbage and a handfull of mushrooms that no longer wanted to reside in the fridge. Here's a pictute :-) 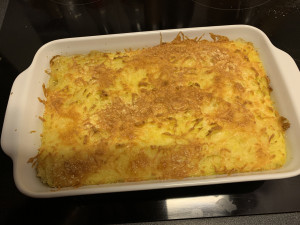 last week was not the best week of the year :-(
In the previous weekend it started snowing and freezing. We hand temperatures going as low as -15 at nigh and -8 in the day, which is a bit exceptional over here.
Last TuesdayI needed the car and it started immediately, but then I found out I couldn't use my clutch. I could put it in first gear and in neutral; and that was all ! I called the roadside assistance and the said that if there were problems with the clutch they would just transport the car to the garage, and that they would be there in about a half hour.
The problem turned out to be a solid chunck of ice that had formed around the clutch, and the assitance man melted the ice with the hairdryer.
A few days later the central heating gave the ghost. Same problem : the boiler is located on the attic, and while the attic floor is very well isolated, but the roof itself is not. and with this intense cold some part of the boiler was frozen. It took a bit more work this time, and it had become rather chilly by the time the boiler was fixed.
So all in all I'm very glad the cold spell is over and done with. Next Sunday it will be 18°C - almost summer !!

I have been baking a number of cakes and other food lately - too much Covid-time on my hands I suppose. But I got a bit bored with all the known recipees and decided to "broaden my horizon" as they say. So I chose to bake a bundt cake. The recipe told me that a bundt cake was baked in a (surprise !) bundt cake mold.  Something like this :

Afterwards I read that it was often baked in a loaf mold.

Because I wasn't paying enough attention, It didn't really sink in that the recipe used 400gr of flour, so by the time I noticed that, I was getting an awful lot of dough, and my circular mold is a rather small one. So in the end I baked two cakes : a circular one and one in a loaf form: 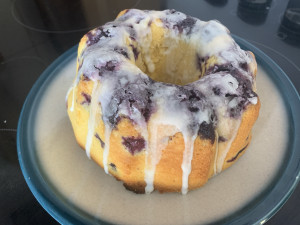 I used a recipe with blueberries, because I'm very fond of those berries !
It's a very tasty cake, and I'll certainly bake it again in the future.  Maybe I'll by a larger circular form - I saw some very neat ones on the net.

So tell me : when you bake such a cake; what mold do you use? A round one or a rectangular one ? And do you use berries or nuts or chocolate chips or .... I'd love to know :-D
Collapse